Are We Not All Creationists? 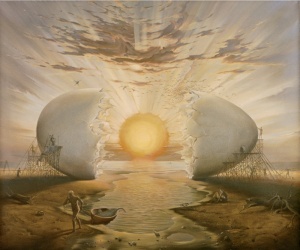 Language barriers are always difficult to overcome, particularly those regarding a more “scientific” rendering of “religious” principles. And so, the discussion of origins devolves into a camp evolution versus camp creation sort of drudgery. Sometimes, I forget the point of it all. What exactly are we arguing about in the first place?

For the simple-minded, it’s about science and reason versus superstition and religion; or the Word of God versus the lies of Satan; or the Believers versus the godless atheists. But what is it really?

I am a creationist who also understands the science of evolution. What do we have in the world around us, if not a creation? And is that creation not a constantly evolving, organic system? Ours is a universe governed by laws and ordered by invisible forces which we understand through what we call “science.” As our understanding evolves, what we consider “scientific” changes accordingly. It is how we grow as a species, through our understanding of the creation we inhabit. Knowing the creation leads to a certain understanding (and appreciation) of the creator, does it not?

Does being a “creationist” make one “religious,” and less “scientific”? I fail to see this correlation. Evolution, scientifically speaking, is a creative process which exhibits the governing laws of the creation. Whether we call it “natural” law, the “laws of nature,” “mother nature” — we are talking about the creation and the forces and laws which govern and shape that creation.

I suppose we could reign-in the argument a bit if we were to apply “scientific” to “evolution” and “creationism” — because there are certainly unscientific elements of both which are often brought to the table. Scientific evolution, referring to the known evolutionary processes which account for changes within species and living organisms over generations and time, which results in variation and statistical spread. Scientific creationism, which sticks to the processes of how and not pertaining to the who or why.

Once we’re settled on that, maybe then we can argue the merits of the specifics, and what we think we know.